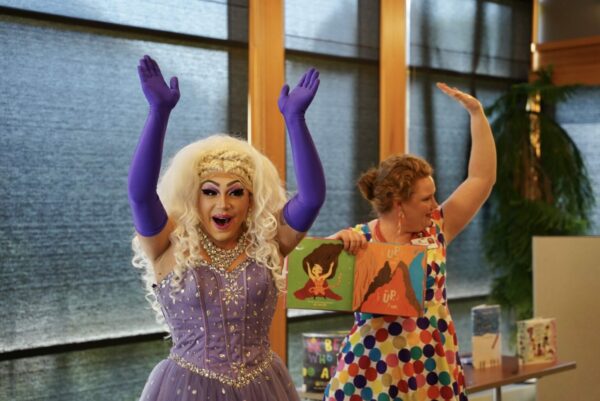 Former Assembly member John Harrington cites the library’s decision to host a drag queen for a children’s storytime in a letter requesting the cut.

A former Ketchikan Gateway Borough Assembly member is asking the borough to cut more than half a million dollars in funding to the community’s library. John Harrington cites the library’s decision to host a drag queen for a children’s storytime in a letter requesting the cut.

“The goal of this action is to stop library programs aimed at preschool and primary school aged children (3 to 9 years old) related to sexuality, sexual orientation, gender identity, thus leaving that discussion if needed to the parents,” Harrington says in his letter.

A drag queen read a picture book to children on Friday as part of the library’s Pride Month schedule. The event was controversial, with some community members and elected officials calling it to be canceled.

Harrington says defunding the library is “the only avenue left to force a community discussion on the library’s activities.”

Though the library is owned and operated by the city of Ketchikan, the borough contributes about 40% of the library’s budget through a 0.7 mill property tax on homes and businesses outside city limits.

Ketchikan’s assembly on Monday will consider whether to place the library funding cut on this fall’s municipal ballot. The measure is not sponsored by an assembly member. Borough code allows residents to request agenda items for the assembly to consider.

If the assembly votes down the measure, Harrington says he’ll try to get the question on the ballot through the citizen initiative process. But he says he’s willing to negotiate.

“The best outcome would be if a reasonable settlement can be reached with the library in a timely period so that the initiative process can be avoided,” he said.

Ketchikan’s assembly meets at 5:30 p.m. Monday. Members of the public have a chance to weigh in at the beginning of the meeting. The meeting is livestreamed on local cable channels and on the borough’s website.

Alaskan culture is amazing! Check this out! #SharingAlaska #Alaska #indigenousculture

After a successful spring whaling season, residents celebrated with a festival over four days that included community meals, the blanket toss and late-night traditional dancing.
78 2    View on Facebook