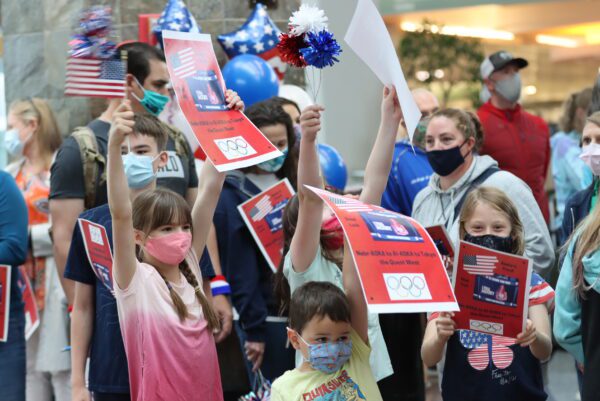 Seventeen-year-old Alaska swimmer Lydia Jacoby of Seward has a shot at an Olympic medal in the 100-meter breaststroke Monday night at the Tokyo games.

Jacoby made it to the finals by winning her semi-final heat Sunday with a time of 1 minute, 5.72 seconds, putting her in 1st place by less than a 10th of a second. She posted the third fastest time in the semi-finals overall.

It’s a quick race and it’s been a quick rise from local Seward Tsunami Swim Club standout to Olympian.

Seward swimmer mom Sarah Spanos has seen Jacoby’s progression, as her sons trained and swam with Jacoby, and the two families traveled together for meets.

While Jacoby’s parents are at an Olympics watch party in Orlando, Fla., Spanos is in Seward helping with a watch party there.

She spoke with Alaska Public Media’s Casey Grove about how the community is preparing to cheer Jacoby on from afar during the women’s final at 6:17 p.m. Alaska time.

The following transcript was lightly edited for clarity.

Sarah Spanos: It’s pure joy. The whole town. One of the local restaurants, Zudy’s, they’re selling the ‘Go Lydia, go!’ stickers. And it’s a fundraiser for the club. And every time they sell a sticker then Judy yells out, ‘Go Lydia!’ And the whole kitchen crew just yells out, ‘Go Lydia!’ in the restaurant. I mean everybody is just cheering, because they just sold a sticker in support of Lydia. And the banners, the signs, you know, people came out at 2:30 a.m. a couple nights ago for the prelim. It was awesome. And the energy just carried over to last night when I think we had a little under 200 with the guests. So tonight, I’m sure there’ll be plenty more and Lydia is aware of it. She’s super excited, kind of probably overwhelmed. Yeah, it’s just the energy is really neat.

Spanos: I think she’s representing all those kids that put in the time and the work, to practice to travel to compete, to fly out of state for competition. I mean, the time and commitment is pretty profound. And yeah, she’s definitely representing every kid that had dreams of going to the Olympics. Yesterday, after the semi-finals, my son was being interviewed and they asked, ‘What would you like the rest of the world to know about Lydia?’ And he said, ‘She’s just one of the most humble and sweetest kids, but get her in the pool, and she’s going to be a fierce competitor.’

Spanos: I had to catch my breath for a second because I’m just like, you say that, and I’m just instantly there, just thinking about it. Lydia is going to look like she’s lagging behind. And she’s going to hit that wall. And then she comes back. Her strong point is the last 50. And, oh, it’s going to be close. It’s going to be a real tight match. And, you know, right now, I think like her coach said, she’s playing on house money because she has nothing to lose. She’s 17. She’s just made her appearance. She’s most likely going to appear at the next Olympics. But she’s just come out of nowhere and she’s got the potential to medal tonight and it’s just overwhelming, but very exciting.