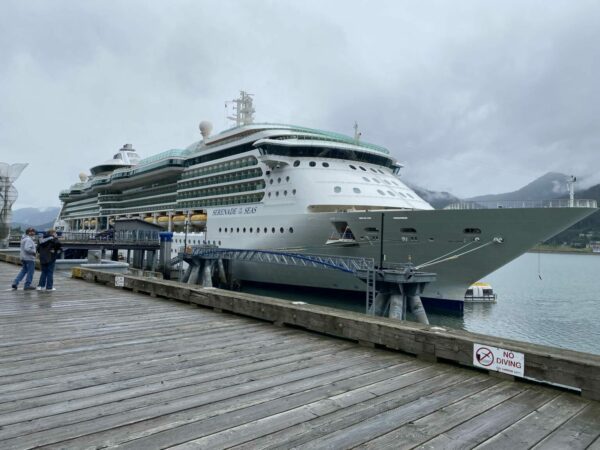 The first large cruise ship to dock in Juneau since 2019 arrived Friday morning.

Juneau residents say they mixed feelings about the ship’s arrival amid an uptick in COVID-19 cases. But, for the most part, the feeling at the dock and inside downtown businesses on Friday was one of hope.

Listen to this story:

Royal Caribbean’s Serenade of the Seas arrived in Juneau around 7 a.m., carrying less than 650 guests and a little more than 800 crew members.

In non-pandemic times, the vessel has room for more than 2,400 passengers, but it’s traveling at a reduced capacity.

Russ and Kacy Radigan walked off the ship around 10 a.m. Traveling from Columbus, Ohio, this was their first time in Alaska and a long-awaited trip.

“We planned this Alaska cruise like two years ago before the pandemic happened and it kept on getting canceled and canceled,” said Russ Radigan. “This was the first Alaska cruise opportunity that we had (since then), so we decided to take it.”

The Radigans were on their way to see the Mendenhall Glacier and they’ve already been on several whale watches and other wildlife excursions.

“We saw a number of whales, a number of seals and a number of otters and you know, we thought maybe we’d see one or two,” he said. “I think they were waiting for us.”

Jeremy Schroeder was also aboard the Serenade of the Seas. He said despite the circumstances, he felt very safe aboard the ship and comfortable with the COVID-19 protocols that were in place.

“Most people (aboard the ship) are vaccinated,” he said. “Obviously the young ones aren’t, but I’ve been pleasantly surprised by everybody still wearing their masks, even though we are all vaccinated.”

Schroeder said he and his family were planning to take a helicopter tour out to the glacier if the weather held.

Of course, with safety protocols, came a much quieter scene at the dock on Friday. People were just slowly trickling off the ship and the booths offering whale watching and other tours were less than half full.

Greg Pilcher was manning one of the booths for M&M Tours.

“It’s pretty slow,” Pilcher said. “There’s not a whole lot of people on the ship, but I think we did better than expected. We wrote a couple tickets, which was great. I think we just wanted to get out here and like practice and remember how to do everything and it just feels really good that there are people here again because it’s been a long two years for sure.”

Down the street, the Red Dog Saloon had just opened for the day and the employees weren’t wearing their usual street clothes. Waitress Emily Lange said the Red Dog is a different restaurant when the cruise ships come to town.

“This is my first day wearing the corset and the fun dress,” she said. “It’s more about the showmanship when the tourists come in. So we put on this getup and we’ll have live music and we’ll all sing along. I’m just excited for being busy all the time.”

Some cruise passengers made their way to the gift shops downtown, like The Bear’s Lair, where employee Kaysa Korpela said she’d already made some sales.

“There’s been a few customers coming through and I really appreciate that they’re mostly masked up,” Korpela said. “I think they got the word on the boat that it was respectful to do that and most of them have been very respectful and if they’re not masked they ask if they should be.”

She said the passengers seemed excited to be there and most were just wandering around before going on tours later in the day. Korpela said she’s glad to see travelers in the store again.

“But I’m glad that it’s starting slowly because I wouldn’t want to see like five boats in the harbor all at once,” she said. “This is a good introduction. I’ve worked in this business for about four or five years now. Sometimes it can be pretty hectic but today has been pretty easy to handle.”

After leaving Juneau, the Serenade of the Seas is scheduled to dock in Ketchikan before stopping in Sitka for a second time on Wednesday. Another ship will also be in port in Sitka that day.