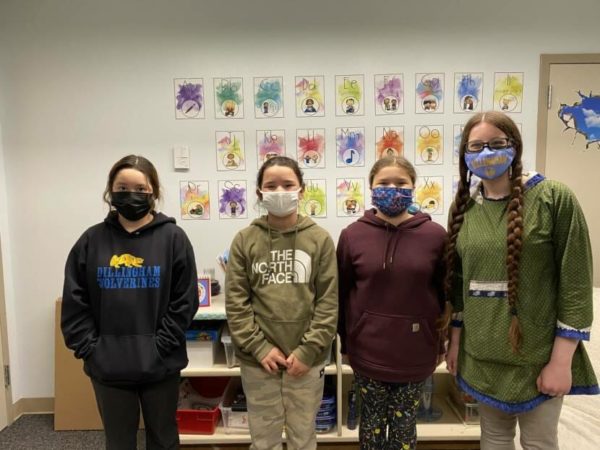 Interior Secretary Deb Haaland on Friday declared “squaw” to be a derogatory term and kicked off a policy to change all federal place names that contain it.

In Dillingham, three sixth-grade girls could not be happier.

Alora Wassily, Trista Wassily and Harmony Larson live and attend school not far from Dillingham’s Squaw Creek — one of more than 20 geographic features in Alaska that contain that word.

They have been trying to change the name since a visit to the local tribal office last year, when they learned of how the creek got its name.

“We thought it was offensive,” Alora said.

The story is that in the early 1900s, before Dillingham got its name, seven sisters came to live in the area, and some settled near the creek. For white men, the creek became known as a place to find a Native wife. Rather than naming the creek after one of the sisters, or using an Indigenous name, a racialized term for a Native woman stuck.

Once the girls began to think about it, the name increasingly galled them.

Some students have to take the Squaw Creek bus to school. One day, Alora counted the signs on her ride home.

They pondered it for about a week, then asked their teacher how they could change the name. The adults around them began to consider the name, too.

The creek is near the Dillingham airport so when visitors arrive, they first see a sign that says “Welcome to Dillingham.” The next sign says “Squaw Creek.”

“It’s one of those things you just kind of take for granted,” said Dillingham school program coordinator Robyn Chaney. “It took these girls who are younger and wiser than us to point out that it’s derogatory and offensive, and we should do something about it.”

With guidance from adults, they looked into the name change process, started gathering community support and figured out the cost of changing those signs.

While they were proceeding down their track, the head of the U.S. Interior Department launched a different process.

Chaney said she’s thankful to Haaland, the first Indigenous woman to serve as a cabinet secretary.

“I think it took a Native woman to be in that position of power to make something like this happen,” she said.

Secretary Haaland’s order may change the name of the creek on federal maps, but there’s still a local and state process ahead. Chaney figures the declaration that the term is derogatory will carry a lot of weight.

The order says the name should be “erased from the National landscape.” It makes reference to a 1962 order from Secretary Morris Udall that removed an offensive name for African Americans from the federal registry of geographic names.