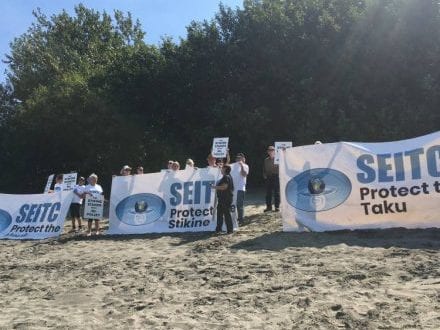 A booming Canadian mining area known as the Golden Triangle is key to northwest British Columbia’s economy. But Southeast Alaska tribes, fishermen and other concerned citizens say that the Canadian mining sector enjoys all the economic benefits, while those downstream bear much of the ecological risks.

Efforts to elevate the issue to the international level have had some successes. And recently, the Inter-American Commission on Human Rights informed a coalition of 15 tribes that it had agreed to take up the matter.

The Southeast Alaska Indigenous Transboundary Commission’s Tis Peterman told lawmakers at an April 27 meeting of the Alaska House Fisheries Committee that its most recent petition was submitted “which basically stated that the transboundary mining will have devastating effects on our way of life and downstream communities.”

The Washington D.C.-based IACHR is an arm of the 35-member Organization of American States, which Canada joined in 1990.

Formal cross-border efforts at the state and provincial level have been in place since 2015 when both sides signed an agreement pledging cooperation on transboundary resources.

But tribes have complained that progress has slowed. And there’s been little to no consultation with tribes since the state’s political transition following the election of Gov. Mike Dunleavy.

Ray Paddock of the Central Council of Tlingit & Haida Indian Tribes of Alaska told lawmakers that tribes on both sides of the border have taken to doing their own environmental work independent of state and provincial regulators.

“Our way of life depends upon our health of the transboundary waters, and it’s important for Alaska tribes and B.C. First Nations to be fully engaged for to collaboration to exist,” he said.

Commercial fishing groups have raised concerns about poor salmon returns in transboundary rivers like Taku and Stikine, which are some of the largest salmon-producing systems in the region.

“UFA is increasingly concerned with the potential impacts to fish habitat and water resources from at least 12 large-scale, open pit and underground metal mines in British Columbia that are abandoned, permitted or operating in the headwaters of transboundary rivers,” Leach said.

But there was skepticism from at least one member of the House Fisheries Committee.

“I grew up in northern Minnesota, and I used to swim in the tailings ponds — and look at me,” quipped Mat-Su Republican Rep. Kevin McCabe.

“So my point is, I think there’s all sorts of different tailings and tailings ponds, and some of them are toxic. Some of them are not, we’ve had six years now to study Mount Polley and I’m interested,” he continued, “really interested to see how it’s affected us in the the lake and the fish and that sort of stuff.”

“It seems like we’ve heard from a whole bunch of fish people here today. I’m concerned that there’s no balance in this hearing today,” he added.

The Dunleavy administration recently announced it had wrapped up its joint monitoring with B.C. after collecting two years of data. Both sides argued that in-stream surveys by the federal governments as well as samples being collected by tribes made the state and provincial project duplicative.

Chris Sergeant of the Flathead Lake Biological Station has been tracking efforts to date. The university researcher told the House Fisheries Committee that key questions remain: are the overall conditions of transboundary rivers changing over time? And how are polluting legacy mines such as the long-closed Tulsequah Chief affecting the environment downstream?

“To date, no monitoring efforts in transboundary watersheds have been designed to answer both of these questions,” Sergeant said.

Congress appropriated more than $3 million last year for renewed stream monitoring at border stream gauges operated by the U.S. Geological Survey. And a cross-border group of resource agency officials from both Alaska and B.C. continues to meet at least twice a year on transboundary issues.

The tribes’ human rights petition says upstream mine pollution from British Columbia could harm salmon and hooligan runs on the Taku, Stikine and Unuk watersheds.

It asks the Inter-American Commission on Human Rights to hold a hearing and investigate these concerns. The Canadian government has three to four months to respond.

Sharing Alaska is in Alaska.23 hours ago
Alaska

Some nights are dreamier than others. What incredible green flames!