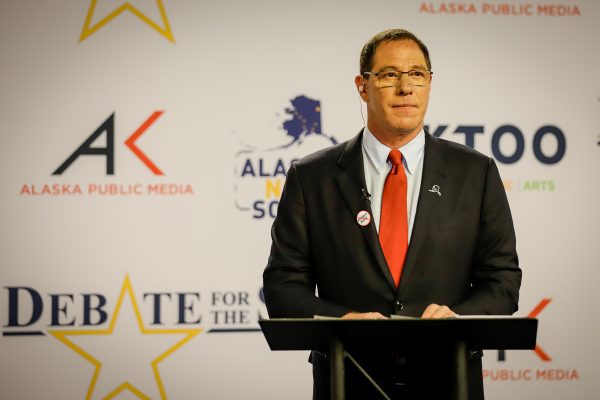 Gross, a top four candidate for US House, calls it quits

“It is with great hope for Alaska’s future that I have decided to end my campaign to become our state’s next Congressman,” he said in a statement emailed to Alaska reporters.

He declined an interview request to explain further.

Gross finished in third place in last week’s special primary to fill the vacancy left by the death of Congressman Don Young. He was on track to be one of the four candidates who would advance to the special general ballot.

Instead, the fourth spot on that ballot will go to the next finisher — and that appears to be Republican Tara Sweeney, a former executive of Arctic Slope Regional Corp. (Votes are still being counted in that race. Sweeney is nearly 2,000 votes ahead of Santa Claus, a progressive nonpartisan candidate.)

Sweeney would join Republicans Sarah Palin and Nick Begich III, and Democrat Mary Peltola on the special general ballot in August. It’s a reversal of fortunes for Sweeney. She conceded the special election last week and said she was re-evaluating her options for the regular election. She has strong support from Alaska Native corporations and their affiliates.

Sweeney’s campaign did not respond to a request for comment Monday.

Gross endorsed both Sweeney, who is Inupiaq, and Peltola, a Yup’ik salmon advocate and former legislator.

“There are two outstanding Alaska Native women in this race who would both serve our state well, and I encourage my supporters to stay engaged and consider giving their first-place vote to whichever of them best matches their own values,” Gross’s resignation statement says.

Gross resigned both races — the special election to pick a House member for the remainder of the year, and the race to decide who will represent Alaska for the next full term in Congress.

An orthopedic surgeon and commercial fisherman from Southeast Alaska, Gross became a household name statewide in 2020, when he challenged U.S. Sen. Dan Sullivan.

Democrats around the country responded to the death of Supreme Court Justice Ruth Bader Ginsberg that fall by boosting their efforts to oust Republicans from Congress. They poured money into Senate races. Gross ultimately raised $19 million for that campaign. His ads saturated the airwaves and the internet but he lost to Sullivan by a substantial margin.

He launched his U.S. House run after Young died. His campaign raised more contributions than any candidate other than Palin.

Want more election news? Subscribe to our new newsletter, Alaska At-Large, for a weekly roundup of the latest on statewide races.

Alaskan culture is amazing! Check this out! #SharingAlaska #Alaska #indigenousculture

After a successful spring whaling season, residents celebrated with a festival over four days that included community meals, the blanket toss and late-night traditional dancing.
71 2    View on Facebook