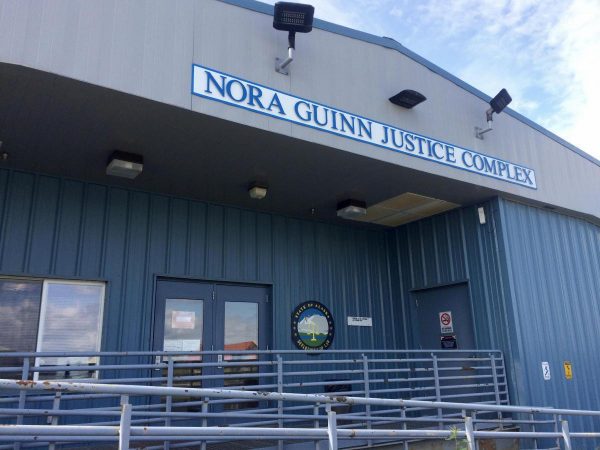 A state judge sentenced former Bethel elementary school principal Christopher Carmichael on July 21 to a 25-year sentence with 10 years suspended for sexual abuse of a minor. The judge imposed what he called a severe sentence because the former principal had abused the trust he cultivated in his victims and the community.

On July 21, 57-year-old Christopher Carmichael walked into the Bethel courtroom in an orange jumpsuit, face mask and handcuffs. The courtroom was relatively empty. No members of the public outside of KYUK were present.

Previously, the former teacher and principal had been a trusted, charismatic figure in Bethel. That was before he was arrested in 2019 and pleaded guilty to a state charge of sexual assault of a minor in the second degree.

Carmichael told the court that he accepted the plea agreement of 25 years so that the girls he abused, former students of his, wouldn’t have to testify in court and relive their traumas.

“I’m trying to own what happened, and accept responsibility for it, and serve the time that’s necessary to begin a healing process because many people have been affected by what’s happened here,” Carmichael said.

Carmichael’s attorney asked the judge to temper the severity of the sentence based on his client’s history. Carmichael told the judge about being diagnosed with PTSD from abuses he suffered as a child and from his time serving in the U.S. Marine Corps. He said that he never sought psychiatric help for either experience.

“And it’s not an excuse. I want to make that clear to the court,” Carmichael said. “If there’s any good that can come out of this situation, if you have been traumatized, seek help so that you don’t wind up in the situation I’m in now.”

Judge Terrence Haas said that the 25-year sentence the state and defendant had agreed upon was harsher than what most defendants would receive for similar crimes. However, he said that the sentence was warranted because of Carmichael’s abuse of power and trust that he had cultivated in his victims and the community.

Haas also said that he took into account the fact that Carmichael committed his crimes in a region with a tortured history of sexual abuse crimes by people in positions of power.

“The hope is other individuals who might come here, or who might be here, who might imagine that they could act in this way or take advantage of our community or our most vulnerable citizens in this way, that they would know and understand that the consequences would be as severe as the law permits,” Haas said.

Haas handed down a 25-year sentence with 10 years suspended. He said that would likely translate to 10 years in prison with good behavior. Carmichael’s state sentence will run concurrently with the 15-year federal sentence he received a week ago.

Carmichael will have to register as a sex offender after his release, which will likely be when he is at least 70 years old. As part of his condition of release, he will not be allowed to use any internet-capable electronic device or be in contact with anybody under the age of 18.

Attention now turns to the school district that continued to employ Carmichael after multiple reports of the former principal’s inappropriate behavior with students. Attorneys for four girls have filed lawsuits against the Lower Kuskokwim School District, claiming that LKSD failed to protect the girls from sexual abuse at Carmichael’s hands. Jury trials for those lawsuits are scheduled to begin this fall.