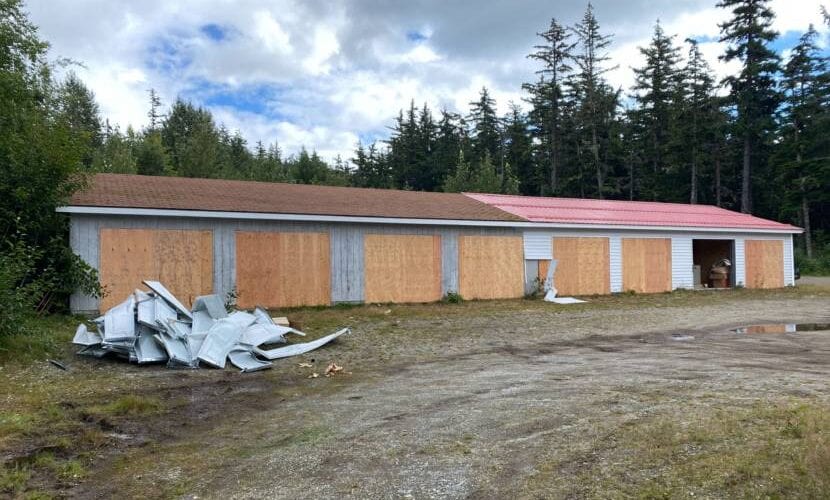 ‘These are the doors, they look like tacos’: More bears killed amid spate of damage in Haines

Last year Haines police got 185 bear-related calls, which was more than double the 2018 number. This year there have already been more than 200.

Haines townsite residents heard more gunfire than usual this week as law enforcement worked to get bears off property where they’d found food.

According to Haines Borough dispatch records, bears broke into properties about 20 times last month in August — a dramatic uptick. That included several homes, a handful of sheds and outbuildings, a shop and vehicles.

Last Monday, law enforcement shot four bears on Monday in a densely populated area around Small Tracts Road after they found food on private property. Police Chief Heath Scott said that even after law enforcement killed some bears, others kept arriving at the scene. The police department returned later to put up an electric fence.

“We’re looking at eight doors all piled up at the end of the lot there,” he said. “Bears. Pretty brutal.”

Bears ripped the garage doors off of each unit on one of his buildings over the course of two evenings this week.

“These are the doors, they look like tacos. Big old pile of trash here. Recycling, hopefully,” he said, kicking the pile of bent and broken metal.

Contractors boarded up most of the units with plywood, but Dunbar pointed out muddy paw prints on the fresh wood — the bears returned and tried to get in again. Claw marks on the building and raw siding showed where the bears tried to peel the plywood away.

Because the bear destruction happened on two separate nights, that’s two separate insurance claims for Dunbar. Each has a $5,000 deductible.

Dunbar said the bears found canned salmon in one of the units. It’s unclear if the tenant stored it properly. He said he gets it — the bears are hungry. Dunbar is a fisherman and knows firsthand that salmon numbers are bad this year. But when a neighbor called the state wildlife trooper and Haines police to report more bears in the neighborhood, Dunbar said hearing gunfire was okay with him.

“I like to keep my karma clean. I like to keep it cool with the bears, but this isn’t cool with me. I won’t lie, I was a little excited to hear those gunshots. It sounds terrible, but I mean, after all the destruction that they’ve done here, they, I mean, this could be somebody’s home and they’ve broken into several homes this year already.”

A dispatcher with over fifteen years of experience in Haines said she’s never heard anything remotely like the recent slew of bear damage. Neither has the police chief.

“I would have never imagined when I entered into this career field that I’d be dealing with bear issues like this, but it’s something I’ve had to learn to accommodate here,” Scott said.

He says the number of calls the department has received this year is extraordinary. Last year there were 185 bear related calls, which was more than double the 2018 number. This year there have already been over 200. And Scott ends up on a lot of them, often as backup to other agencies, like the state wildlife trooper or the state’s Department of Fish and Game. When he’s called, the bear interaction is already considered an emergency.

“I certainly don’t want to be dispatching animals under these sets of circumstances,” Scott said. “Where I ended my struggle is when I have to equate an animal’s well being with the public safety.”

About 14 bears have been dispatched in Haines this season, according to the Department of Fish and Game and the Haines Borough Police Department. State wildlife troopers keep the official count, but the local trooper was not available for comment by broadcast time.

Scott says he’s aware that number doesn’t sit well with some community members, who don’t like it when bears get shot.

“Considering the resources that we have, there are certainly occasions where bears do need to be killed. And it’s really, really sad,” said Shannon Donahue, the executive director of the Great Bear Foundation. She works to educate people about bears, to prevent situations like Monday night. But she said this year there are multiple factors leading to bear interactions.

First, natural bear foods aren’t abundant this year. Salmon runs are low. Winter was long. And the berries aren’t really shaping up so well, either. But she said humans have a role too.

“We have a history of people not taking care of their bear attractants, and that affects everyone in the community,” Donahue said.

She said this also affects people who store their food properly. If bears get food from breaking into one shed, they’ll try another.

“Sometimes in a really intense year, we might see bears breaking into structures that might not even have an attractant in them,” she said.

The local dump used to be a food source for bears, but after a management change, the premises are more secure. Some people think that’s why certain bears are used to finding food in town. Another factor to consider is that big game guides around Haines haven’t had out of state clients this season due to COVID-19. There are just more bears than usual.

“It’s really busy in Juneau and lots of places in Southeast actually,”said Carl Koch. It’s his sixth bear season as a management biologist for the state’s Department of Fish and Game in this region. He says this is by far the busiest year he’s seen.

And we are just entering high season for bear interactions. Over the next couple of months, bears will enter what’s known as hyperphagia — a state where they are compelled to eat continuously before they hibernate.

“This is not the year to gamble. I would suggest anybody that has foods or garbage or a freezer in a shed, just — electric fences are pretty cheap now — just put an electric fence around it, don’t even play around,” he said.

There’s some good news, though. Bear biologists say food conditions in the field have improved. More fish are passing the weir at Chilkoot, and berries have been showing up in scat.

Koch says in one way, Haines is having an easier time than Juneau. The bears there have learned to open car doors.