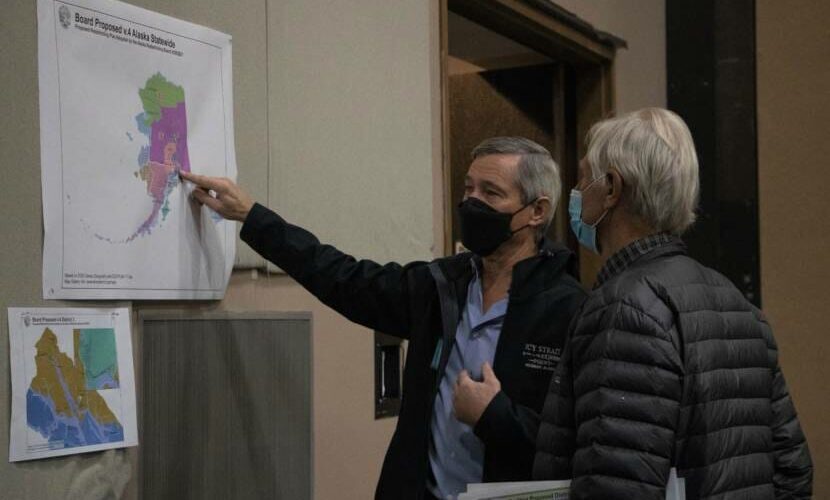 The state’s high court wrote that the Redistricting Board “engaged in unconstitutional political gerrymandering to increase the one group’s voting power at the expense of others.”

The Alaska Supreme Court says the board that recently redrew boundaries for the state’s legislative districts crafted state Senate districts in Anchorage in a way that favored Republican-leaning Eagle River.

The state’s high court agreed with an earlier Superior Court decision and wrote in an opinion that the Redistricting Board “engaged in unconstitutional political gerrymandering to increase the one group’s voting power at the expense of others.”

That means the board has to adopt a different plan.

The following transcript has been lightly edited for clarity.

James Brooks: The map that the redistricting board must now approve in place of this prior version that was thrown out is slightly less favorable to Republican candidates in Anchorage. And that opens the door for the possibility, at least opens the door a little wider for the possibility, of a coalition to take control of the Senate after this year’s elections. That’s by no means guaranteed. But how I tend to think of it is, like, you know, baseball stadiums have different outfield walls, based on where you go. This decision basically changes the shape of the outfield. So a hitter might have a better chance in this field where, before, the outfield wall might not have been as good for them.

Casey Grove: Backing up, prior to this decision, what was the original accusation of gerrymandering based on?

James Brooks: So, if you’ll recall, the board approved a map of Senate districts and a map of House districts in November, and almost immediately there were lawsuits about the process used to implement those maps. In November, when the board created its map of Senate districts, it came out of executive session, a closed-door session, and almost immediately voted. And some people affected by that decision cried foul and said, “Hey, this was a secret process. You didn’t do this in public. We have no idea how you came up with this, which appears to violate our constitutional rights.”

James Brooks: Right. And that’s something that’s important to understand, is that there’s five members of this board, all appointed in 2020 by high ranking government officials. So the three Republican officials appointed Republicans, the independent Speaker of the House and the Chief Justice (of the Supreme Court) each appointed people who are registered as undeclared. And the undeclared members, Nicole Borromeo and Melanie Bahnke, really objected to the procedures and the result and said, “Hey, we expect this will result in a lawsuit, and it should result in the lawsuit.”

Casey Grove: So tell me more about what that map that the board did pass, what the implications of that would have been if it had not been struck down, I mean, in terms of what those districts would have looked like politically.

James Brooks: Yeah, there’s some nuance to this, but keep in mind that Anchorage has, over time, started voting more Democratic. And the map passed by the board, the one that was overturned today, would have resulted in two safe Democratic seats, two safe Republican seats, and the remainder being toss-up seats. That would have been four competitive districts, one that leans Republican, the remainder either toss ups or leaning Democratic. The switch to a new option, a new map, means two solidly Democratic districts, one solidly Republican district and five competitive districts, two of which lean Republican. So the result is one of the safe Republican seats now is a toss up or is at least competitive, potentially leaning Republican.

Casey Grove: Gotcha. How different is this plan that we’re going to use in this upcoming election from what existed prior to this this redraw by the redistricting board?

James Brooks: Yeah, it’s not a big difference in the boundaries being drawn, because this is one part of Anchorage with fairly limited ripple effects. But what matters is that because the state Senate is so closely divided, that even a small change can have big impacts. For example, if even one or two seats flip from a staunch Republican to somebody who’s more center right, that could open the door for a coalition majority in the Alaska Senate, a coalition that includes Democrats and more moderate Republicans, something that we’ve seen for the past few years in the State House.

Casey Grove: It seems complicated and maybe more so this year than usual. I mean, between the redistricting fights and the ranked choice voting. Does it seem like that to you? Does it seem sort of more complicated than any time in the past?

James Brooks: It is. It’s a very complicated election year with a new election system. So we’re voting in a new way. We have a new map of districts that will affect which candidates enter the race. So there’s a lot of changes this year. And we don’t know how that’ll play out yet.