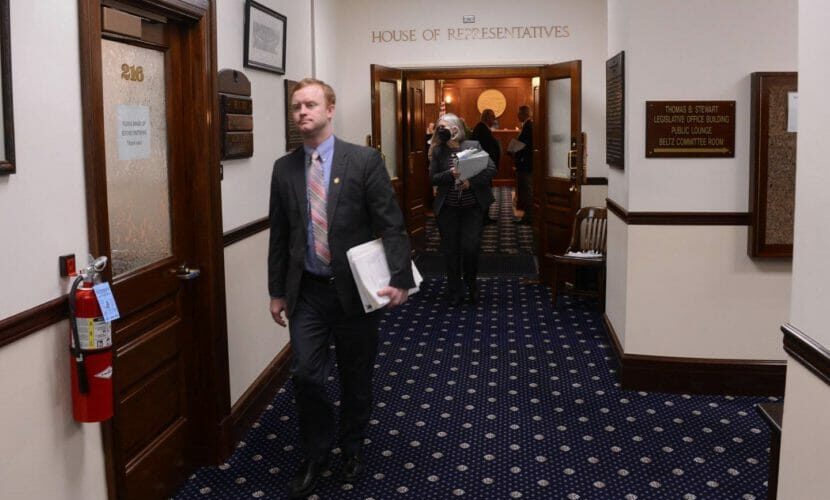 The removal comes after years of altercations between Eastman and fellow lawmakers.

Wasilla Republican Rep. David Eastman was removed from the House minority caucus Thursday after most of the caucus members indicated they were in favor of the decision.

“I think it’ll help us be more productive as a caucus. Just sometimes, his demeanor gets in the way of trying to be productive,” Anchorage Republican Laddie Shaw said in an interview Thursday.

Eastman will be removed from the House Rules Committee and an ethics committee but will keep other committee assignments, said House Speaker Louise Stutes, R-Kodiak. That decision is subject to approval by the Legislature’s Committee on Committees.

Eastman’s removal came on the heels of a resolution passed by the Alaska Republican Party during its convention on Saturday to rebuke the Foundation for Applied Conservative Leadership.

Eastman is an active member of the organization, which seeks to pressure Republican lawmakers to ensure they vote in certain ways. The group had attacked Rep. Kevin McCabe, R-Big Lake, after he tabled several budget amendments proposed by Eastman.

Minority Leader Cathy Tilton, R-Anchorage, said the resolution was not the sole reason Eastman was removed from the caucus.

“Representative Eastman has every right to represent his constituency in a manner that he thinks is the right way to do that. But unfortunately, that’s become too disruptive for us to have him in our caucus,” she said Thursday afternoon.

Tilton said she had polled all 18 members of the Republican House minority caucus, and most of them sought Eastman’s removal.

“They finally said, ‘Enough’s enough,’” said Shaw, noting that freshman members of the caucus were instrumental in the decision to remove Eastman.

The removal comes after years of altercations between Eastman and fellow lawmakers. In 2017, he was formally reprimanded by the House after claiming that women in rural villages try to get pregnant so they can get a free trip to a city for an abortion.

In 2020, the minority suspended him from legislative committees and placed him on “probation” after conflicts with fellow Republicans. In the following election, many of his fellow Republicans campaigned against him, but he won re-election anyway.

Earlier this year, the House considered taking action to punish Eastman for his reported membership in the far-right Oath Keepers, whose leaders were charged with seditious conspiracy in connection with the Jan. 6, 2021, riot at the U.S. Capitol.

As a consequence of Thursday’s decision, Eastman will no longer attend caucus meetings.

Eastman did not respond to a request for comment Thursday by email or phone.

The Alaska Republican Party’s resolution against the Foundation for Applied Conservative Leadership states that the party will not provide financial support or party endorsements to candidates “who are practitioners of the egregious and divisive activist principles and processes” of the foundation. An overwhelming majority of convention-goers voted in favor of the resolution.

The resolution does not mention Eastman by name, but he is known to be active in the conservative organization.

The foundation, known as FACL, is “part of what is causing the divisiveness in the Republican Party and in the Legislature right now,” said McCabe, who introduced the resolution at the convention and said he has been targeted by FACL for his votes.

“FACL’s main thing is to try to hold other Republicans accountable for their actions. So they’re trying to drive Republicans to the uber-conservative or ultra conservative side of the spectrum. They do that by finding those that they think are a little bit more moderate than they are and attacking them, making them feel pain,” McCabe said in an interview Wednesday.

“I think that the Republicans need to do all they can to unite the party instead of what we call the circular firing squad,” McCabe added.

This story was originally published by the Anchorage Daily News and is republished here with permission.