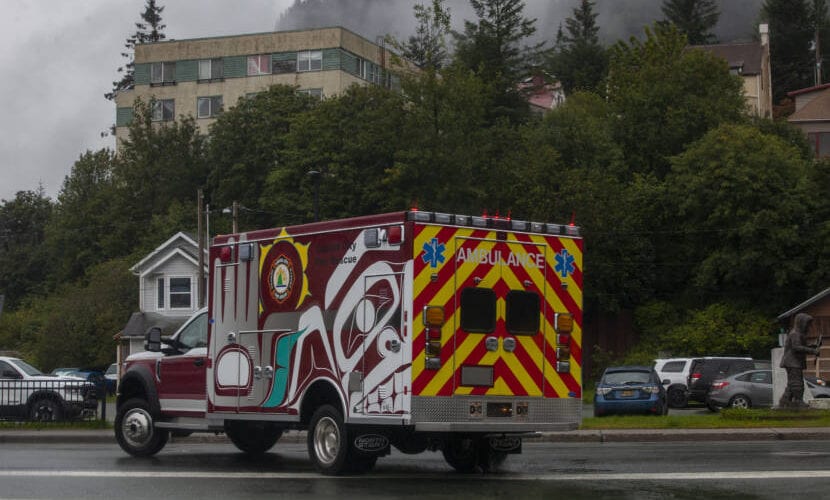 Capital City Fire and Rescue recently refurbished one of its ambulances. It saved the city the expense of buying a new one. And as an added bonus, the ambulance serves as a piece of public art.

Both sides of the newly revamped ambulance feature Tlingit formline designs by Mary Goddard and Crystal Worl; they symbolize the human power of healing.

“We liked the idea and we thought, ‘Well, you know, we need to make sure that it’s culturally appropriate for Juneau and make sure we check it in with everybody,’” Cameron said.

Cameron reached out to Sealaska Heritage Institute to find the right artist. Sealaska then partnered with a collaborative organization of Native entities and tribal governments in Southeast known as Unity Group. Tesla Cox works with the group.

“We wanted artists that represented our community in Juneau, and both artists are local to our region.”

After looking through art proposals, the group chose Goddard and Worl to create the design.

But they had to meet an unusual requirement. According to federal regulations, ambulance bodies must be at least 70% reflective.

Worl said she and Goddard worked to create a unified concept.

“We did a series of sketches and brainstorming and the thing that kept coming up was the human hand. And we talked about the hand being sort of like the sign of healing, and also it’s also a universal symbol that’s recognizable by anyone,” she said.

Worl said it meant a lot to represent indigenous art in a public space.

“I guess a good example would be like the nest house,” she said. “On the nest of the artwork, there’s a face in that nest and basically that represents the spirit or the life that the nest brings or holds or gives.”

Cameron said the unveiling of the freshly painted ambulance was one of the proudest moments of his 29 years in service.

“The message of being a healing hand and healing nature, I really enjoy,” he said. “I really think for me, specifically, I think when you look at the ambulance, I really think it does incorporate the character of the large aspect of our community here in Juneau.”

Cox said she hopes the public work will inspire other communities to represent and support their local artists as well.