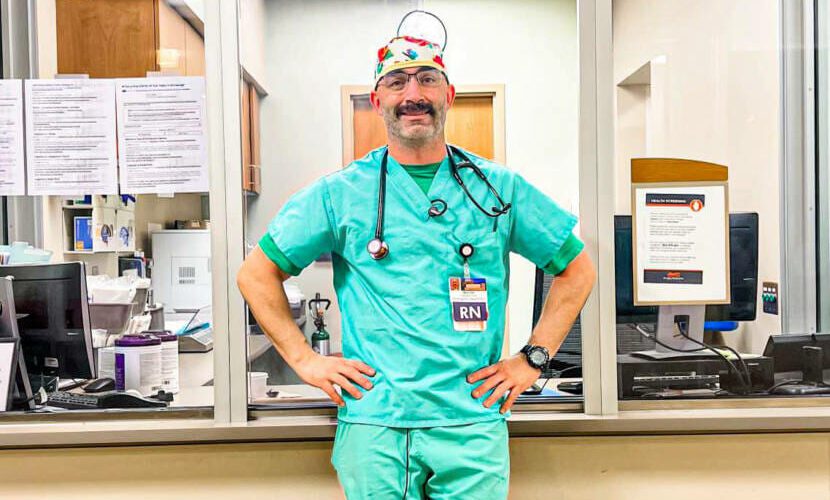 Through the worst of the pandemic and personal tragedy, Matt Paveglio said he’s relied on the dogs for distraction, support and to get him out of his head and into the mountains around the kennel.

Nurse Matt Paveglio has had some tough days over the last two years in the emergency room at Alaska Regional Hospital. This fall, during the height of the delta variant of the coronavirus, he said it was particularly bad.

“We had a stretch of days in mid-August where I had seven deaths before 10 a.m., seven straight days,” he said.

It was a traumatic time for health care workers across the state as they watched their hospitals move into crisis mode and COVID-19 deaths pile up. Some formed support groups, some channeled their frustration into policy activism and some just brought in cookies for their colleagues to try to keep morale up.

Paveglio had another outlet: 20 sled dogs at a kennel near Caswell, in the Matanuska-Susitna Borough, that he was training for the 2022 Iditarod Trail Sled Dog Race.

Through the worst of the pandemic and personal tragedy, he said, he’s relied on the dogs for distraction, support and to get him out of his head and into the mountains around the kennel. He doesn’t know where he’d be without them.

“Maybe I would have had to work out,” he said “Or you just get drunk or you run from it.”

Since September, Paveglio has lived a sort of split life.

He’d spend three straight days working 14-hour shifts in the ER treating COVID-19 patients. By the time he’d get home to Eagle River to his wife and 14-year-old daughter — a Junior Iditarod finisher — it would be late at night. He’d have no energy.

“I get into comfy clothes, I eat and I basically pass out watching ‘Project Runway’ or whatever crap is on the television because I don’t care,” he said.

On his days off, he’d drive two hours north to Cantwell to a friend’s kennel whose dogs he was running. He’d arrive exhausted and let the puppies out. They’d run down the hill to the pond for a swim.

“Immediately you would get away from all of the stress and all the grief,” he said. “The affection of the dogs takes all of that away.”

He’d camp at the kennel for three or four days to train the team.

On a recent weekday afternoon, just days before the Iditarod, he walked around the kennel, with a non-alcoholic beer in hand and a goofy demeanor, far from the solemn nurse you might expect.

He wondered aloud what costume he should pack for his run into Nome: a leprechaun in honor of St. Patrick’s Day or Mario, to whom the mustachioed 44-year-old bears a striking resemblance. He stopped to show off a few of the dogs.

“This is Nala. She’s a peppy, cheerleader, sorority girl type of girl,” he said. “She’s not always the most heady but she just drives.”

Paveglio is relatively new to mushing, but it’s helped him fill a void since he moved to Alaska 13 years ago. To him, the Iditarod took the place of the Big 10 basketball tournaments he’d loved in Michigan.

Soon after moving, he met veteran musher Jim Lanier and started training with Lanier’s dogs. Before Paveglio knew it, he was competing in mid-distance sled dog races. He didn’t think of it at the time, but they served as Iditarod qualifiers.

“I decided finally after my second or third race that oh — maybe I should try and qualify, still not thinking the Iditarod was reasonable,” he said. “And then my mom got sick during my last qualifier”

His mom DeLynn — who was also a nurse and a naturopathic doctor — was diagnosed with ovarian cancer. It was the beginning of the COVID-19 pandemic, and her compromised immune system made it risky to visit. She seemed to recover for a while, but in the fall of 2021, Paveglio realized his mom’s health was failing. He took leave from work to visit her. As she neared death, he told her he’d signed up for the Iditarod.

“It was pretty neat to be able to sign up, and then to just show her, ‘Hey, I’m going to do this,’” he said. “She was proud right up into the end.”

He returned to Alaska and started training, and is calling his squad Team DEEtermined after his mother, DeLynn.

He said he’s always been an emotional guy, but lately, tears have come especially easy. Usually, it’s not from grief.

“Tears of joy, mostly, and it just feels good. Because everything we’ve been through, co-workers, the loss of my mom,” he said. “This hobby has been amazing.”

He finished his non-alcoholic beer and headed indoors to check a few more items off his Iditarod list. He still had bags to pack and food to prepare.

And, he had some important decisions to make, like which costume to pack for Nome.