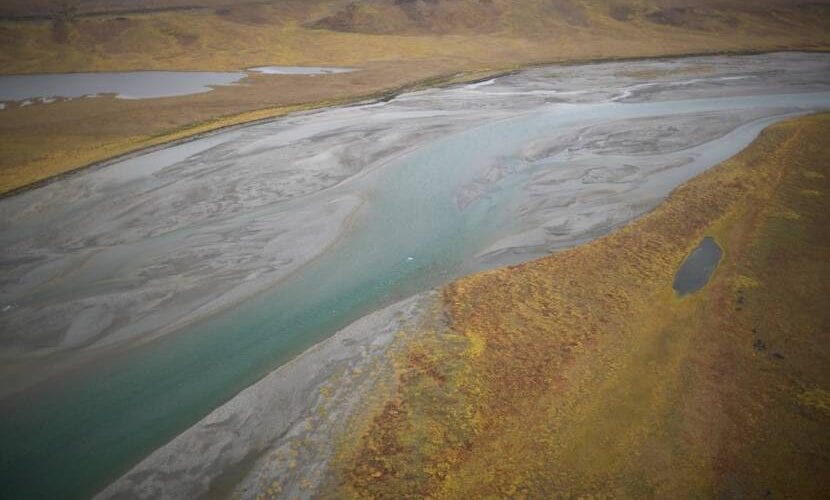 The state won 10-year oil leases for nine pieces of land by submitting the minimum offer: $25 an acre. But drilling for oil in the refuge is expensive, and it faces an aggressive opposition campaign.

Just two companies and a state corporation showed up to the first-ever oil and gas lease sale in the Arctic National Wildlife Refuge last week, after 40 years of debate.

But still, about half a million acres of land did get picked up — nearly all of it by the state of Alaska itself.

So, what happens next?

Here’s what we know.

The Alaska Industrial Development and Export Authority entered the lease sale at the last minute as a backstop, in case no one else showed up to secure the rights to the land.

It wound up as the most aggressive of just three bidders.

That means the state won 10-year oil leases for nine pieces of land by submitting the minimum offer that the federal government would accept: $25 an acre.

“We are very happy that we were able to win some of the tracts in this case,” Alan Weitzner, AIDEA’s executive director, said in an interview Thursday.

“We would have preferred to see a more competitive bid put in place,” he said. “But I do think that there was a lot of uncertainty related to it.”

Drilling for oil in the refuge faces an aggressive opposition campaign. It’s also expensive, and uncertainty surrounds the future of oil demand — as well as just how much crude is actually trapped under the land.

Weitzner said he hopes the state’s decision to step in removes at least some of the uncertainty the oil industry might have about drilling in the coastal plain.

AIDEA has never held a federal oil lease before, and it doesn’t own drilling equipment, so it will likely have to depend on partnering with the industry to explore for oil and develop the land.

“It’s too early to say and give that information of what our definitive plan is going forward,” he said.

“We do have a very strong interest in ensuring that the state has tangible benefits that come from this development. And we have have distinct interest to ensure that it is done in a responsible manner.”

For now, Weitzner said he’s working with the federal Bureau of Land Management to get the paperwork done to finalize the leases.

Usually, the process takes about two months, but it’s expected that the Trump administration will rush to get it done before leaving office Jan. 20.

At last week’s sale, AIDEA spent about $12 million on oil leases that cover about 480,000 acres of federal land.

Half of that cash will go back to the state, because it splits the revenues with the federal government.

Knik Arm Services is one of two tiny companies that each picked up a single oil lease.

Mark Graber manages Knik Arm Services, and in an interview from Texas, he said the payoff is potentially huge if the U.S. Geological Survey’s estimates of the amount of oil beneath the refuge are correct.

“I’m an investor,” said Graber, who described himself as a “snowbird” who splits his time between Texas and Alaska.

“I go where I think a fair investment might offer a decent return for the risk,” he said.

Graber said he’s putting up a “good deal” of his own money to purchase the lease, along with other “funders” who he declined to name. He said he thinks he understands why major oil companies didn’t show up to the lease sale.

“Because it’s controversial,” he said. “They knew Alaska was going to bid on it. So, they knew that they’d have a chance to pick it up later.”

He argues that it won’t be a problem to develop the land without harming wildlife. Knik Arm Services wouldn’t drill itself, but would work with other companies to explore for oil “when the time is ripe,” he said.

Graber said this isn’t the first time he has made investments during a down market.

The other small company that won a lease is Regenerate Alaska, a subsidiary of Australia-based 88 Energy.

The slice of land it picked, on the refuge’s western edge, is near a state-owned parcel that the company already leases, and next to ExxonMobil’s Point Thompson field.

David Wall, chief executive of 88 Energy, told the Anchorage Daily News that he saw it as a “soft entry” into the refuge. He said he doesn’t want to upset anyone, but wants to “make money for ourselves, and the state and its people.”

Meanwhile, Indigenous and environmental groups that have long fought drilling in the refuge say they’re not giving up.

Itchoak said he couldn’t talk specifics about how the groups could block leases from getting issued, “because we don’t want to show our hand.”

Some have raised questions about the legality of the state of Alaska jumping into the lease sale. The Bureau of Land Management said Wednesday that it doesn’t see any legal issues.

Leaders of the Gwich’in Steering Committee say they met Friday with Weitzner, the AIDEA director, and urged him to reconsider leasing the refuge. The Gwich’in subsist on caribou that give birth in the Arctic refuge’s coastal plain, which was the area that the Trump administration put up for sale.

“We let them know that our way of life is not negotiable, and that we wanted to know how they intend to include Indigenous voices, and protect Indigenous ways of life and values,” Bernadette Demientieff, the Gwich’in Steering Committee’s executive director, said in a prepared statement.

Itchoak said drilling opponents just need to halt any progress until Inauguration Day, because they expect support from the next administration.

President-elect Joe Biden and his appointee to lead the Interior Department, U.S. Rep. Deb Haaland, D-New Mexico, have both said they oppose drilling in the refuge.

“We’re hopeful that if we can hold off the issuance of the leases by or before the inauguration, that will be a positive outcome for protecting the refuge for the long term,” said Itchoak.

Biden has not said what his exact plans are for the coastal plain, but it’s possible he could try to buy back the oil leases or hold up the permits that companies need to search for oil and develop the land.

The Wilderness Society and other groups are also in court fighting against the oil leasing program for the refuge.

There are four lawsuits working their way through the federal court system that, effectively, ask a judge to cancel the oil leases, arguing that they’re based on a rushed and legally-flawed plan.

The federal government disagrees, and says it followed the law.