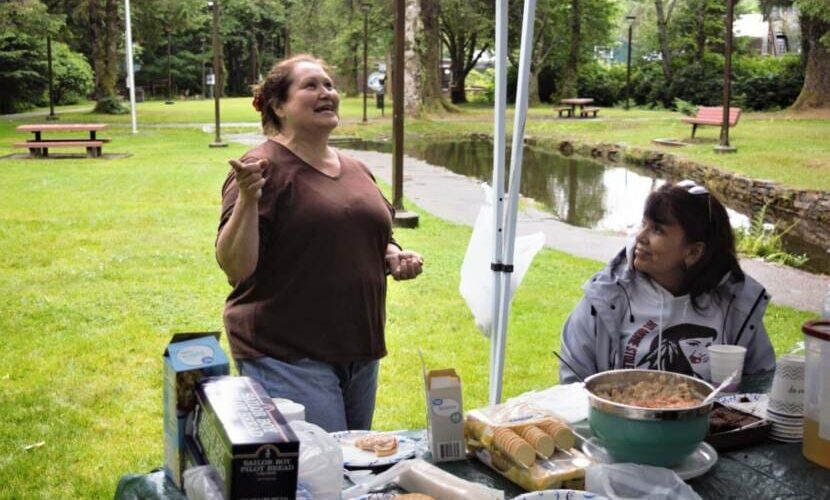 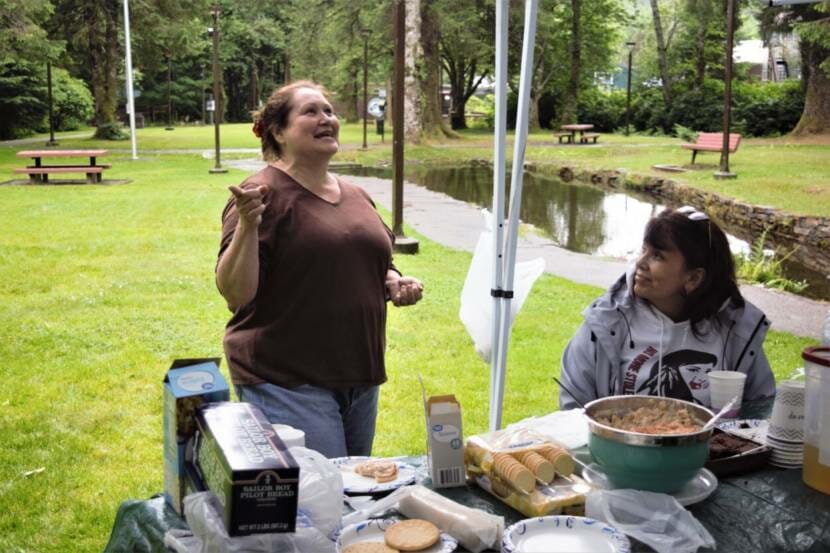 Terri Burr hopes many of the language learners will become teachers someday — and that they’ll pass on not just the language, but Tsimshian history, too.

Combining Shakespeare and hip-hop, students at Anchorage youth center learn to tell their own stories 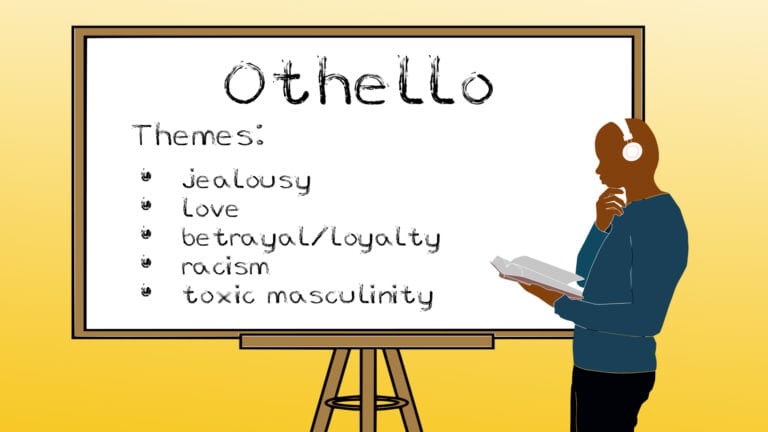 It didn’t take long for the students to find parallels in their own lives with the 17th-century playwright that helped them discuss and work through modern problems. 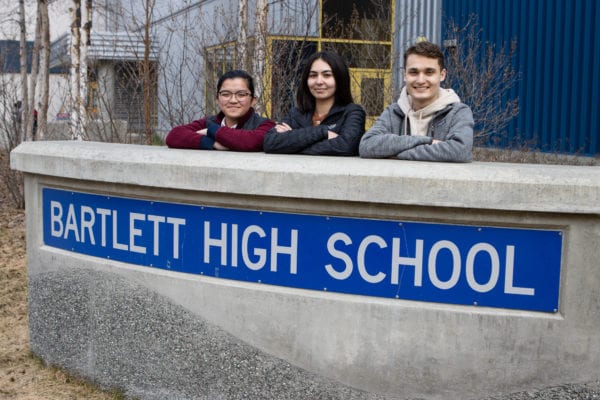 As 18-year-old Allysa Wesierski thinks back to first meeting her friend, Jessica Woo, she recalled Woo was an ambitious student, even in elementary school.

“We met in second grade, and I remember that she wanted, very proudly, to be the first female president of the United States,” said Wesierski.

Woo jokingly rolled her eyes at the comment but conversation between herself, Wesierski, and their friend Andrés Arias is easy as they call up memories and exchange knowing glances about the difficulties of their AP English Literature class.

The trio will be graduating from Anchorage’s Bartlett High School this year, each of them at the top of their class. Wesierski is Bartlett’s salutatorian, and Woo will share the title of valedictorian with Arias. This is the first time Bartlett will have co-valedictorians. Bartlett Principal Sean Prince says their transcripts are virtually identical.

The friends have no qualms about sharing the title. They’ve done almost everything together, from taking classes to becoming Eagle Scouts — the highest ranking one can get in the Boys Scouts program.

Wesierski and Woo are part of the first class of girls to join the Boy Scouts and are believed to be the first two girls in Alaska to reach Eagle Scout status. It was an achievement they had to make quickly since the organization only officially began allowing girls to earn the ranking in 2019.

They all have a deep passion for hiking and camping and the outdoors, Wesierski said. Woo said they have similar humor. But Arias said the motivation and drive to achieve is what makes them such good friends. They supported each other when they decided to sign up for their first advanced placement courses.

“We had never taken something like this. And we didn’t really have that information from our parents of what it takes to get on a college readiness track,” Arias said. “So I think we learned a lot of things together. We entered a lot of uncharted territory together.”

Each of the students come from different and diverse backgrounds: Weiserski was adopted from the Philippines, Arias’ parents immigrated from Mexico and Woo’s family is from Brazil.

While their parents continually pushed them to do their best academically, they didn’t always know the ins and outs of college preparation. The students figured it out together. That alone would be a feat, but adding a pandemic on top of it just made that challenge even greater.

Wesierski said she hit one of her lowest moments right around the time she was applying to college.

“I remember genuinely being worried that I wasn’t going to get into anywhere. And that, alongside the stressors of the change and the new platform, that became really stressful,” Wesierski said. “I was like, ‘Maybe it was just a fluke. Maybe everything has just been easy for me in the past. So I don’t know if I deserve to be where I am’.”

But it wasn’t a fluke.

Wesierski and her friends are moving on to attend some of the country’s most prestigious universities: Wesierski will be attending Stanford, and after deliberating between six different Ivy League acceptance letters, Arias chose Yale. Woo is going to NYU.

It’s not just a big deal for them and their families but also the Bartlett community. Woo said Bartlett often gets overlooked in terms of producing high-achieving students.

“I think that’s part of the reason why we push so hard — because we’re proud to be from Bartlett, and we’re really proud to represent that. Diversity does equal strength, it does equal success,” said Woo.

This year’s graduation ceremonies will look a bit more traditional than last year’s virtual ceremonies, car parades, and socially-distant celebrations. Many Anchorage high schools will be hosting graduation outdoors in their respective football stadiums, and students will be able to have a few guests.

In their student speeches, Woo, Arias, and Wesierski each plan to highlight the resiliency and adaptability of their class after a year of drastic changes.

They didn’t get to attend traditional events like prom, and Wesierski said initially she felt robbed of a typical senior year experience. But she said what they lost shouldn’t overshadow what her class has accomplished.

“I wanted to emphasize and implore everybody to kind of take a pause and recognize graduating from high school as the great achievement that it is,” Wesierski said. “And also recognizing the people that have helped us here because Bartlett is a community but more than that, it’s a family.”

Despite moving on to different schools for the first time in years, the students say their bond will carry them through this next period of change.

Ketchikan school superintendent set to receive $80,624 for stepping down early 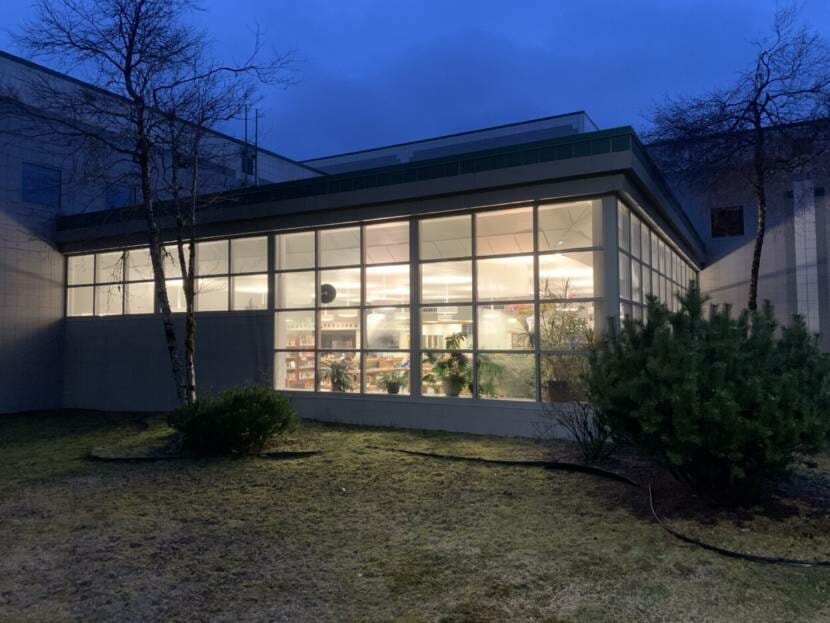 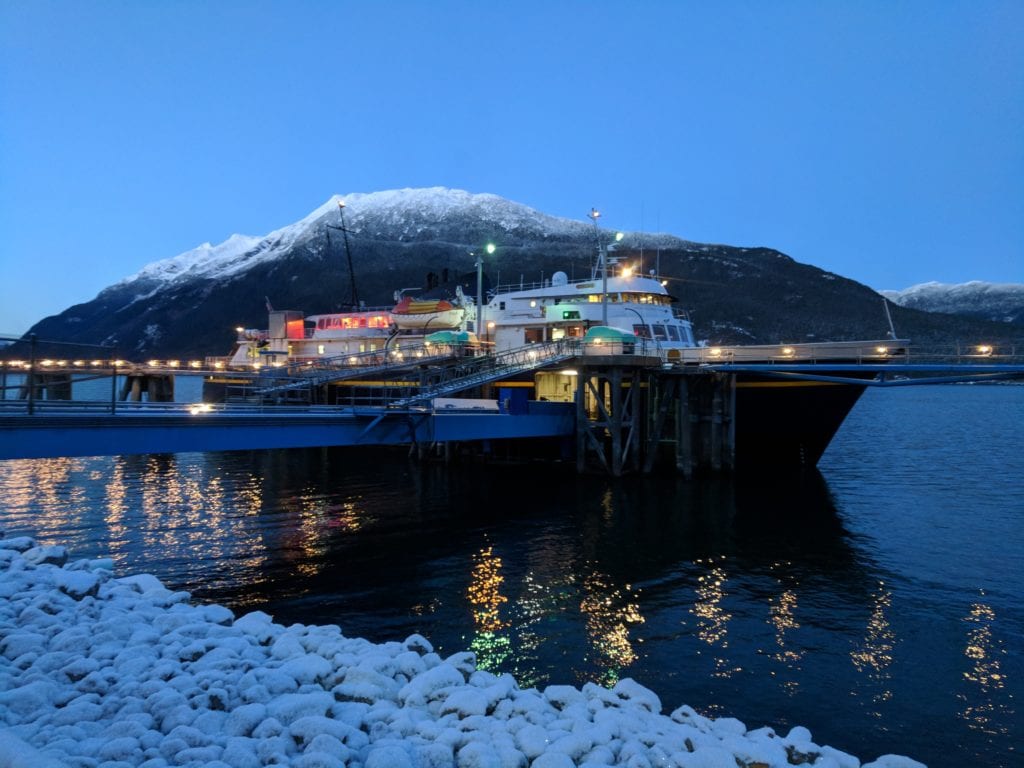 The Haines school superintendent wouldn’t say if the individual was a student or not. State public health officials completed a contact tracing investigation and notified all close contacts.

Students in New Stuyahok practice subsistence skills in the classroom 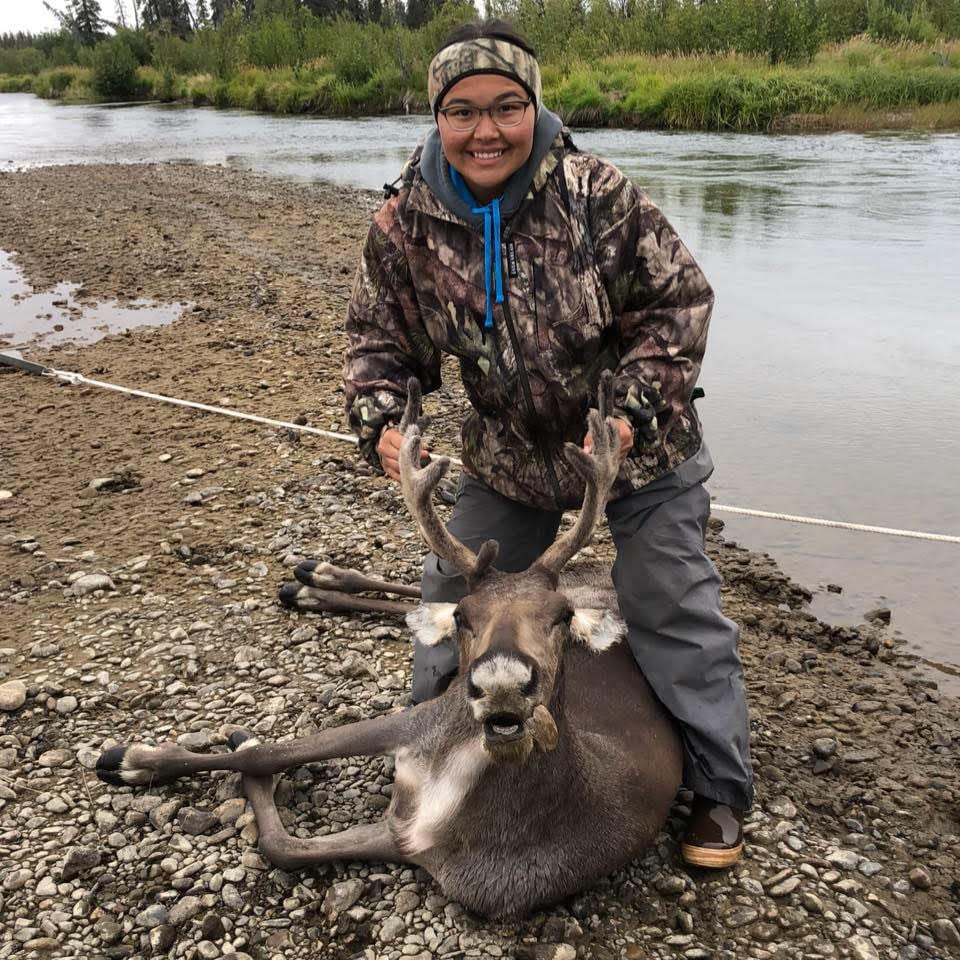 When New Stuyahok shifted to a mix of in-person and distance learning as a safety precaution, the school took the opportunity to incorporate subsistence into the classroom.

St. Paul Island has no confirmed cases of COVID-19, but the community isn’t letting down its guard 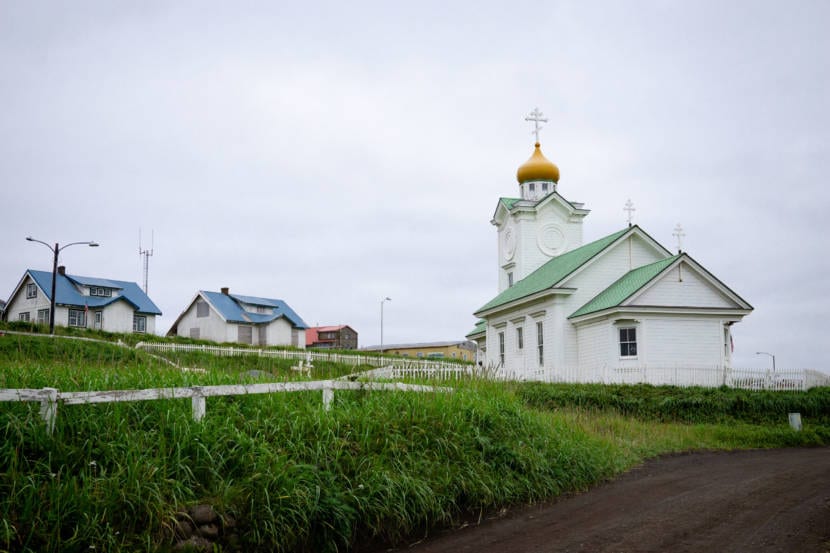 In a remote community like St. Paul Island, disruptions of daily social interactions can be especially devastating. 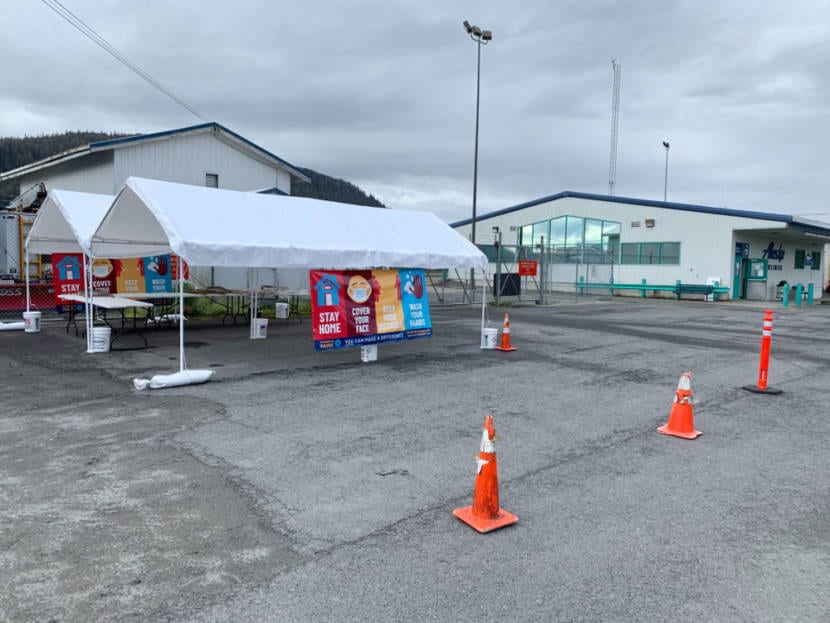 The policy is for travel by any means off Mitkof Island — by plane, boat or ferry 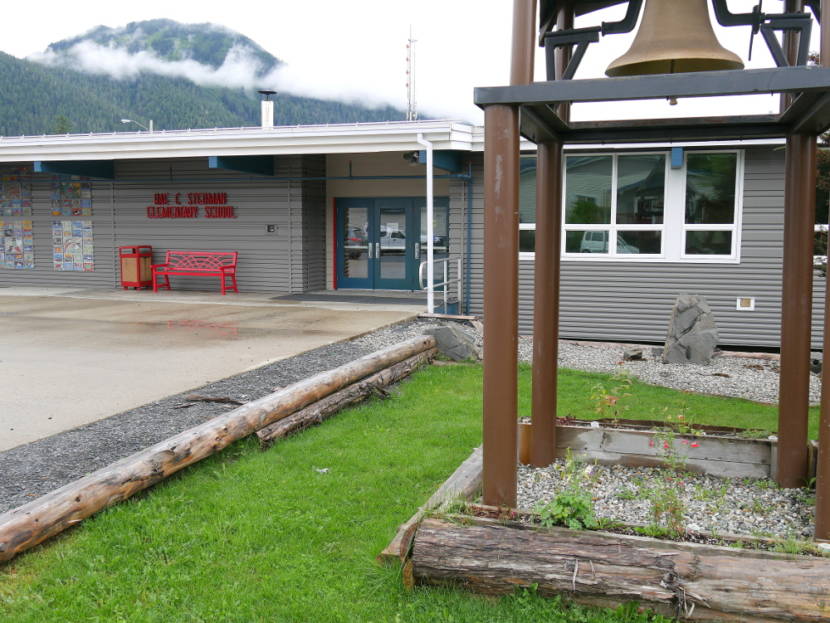 The student is in one of the fifth-grade classes at the elementary school. As a result, all fifth graders are instructed to quarantine for two weeks as well as their identified close contacts.

The Tsunami Warning Center recorded waves of less than 1 foot above normal as a result of the earthquake.
43 3    View on Facebook