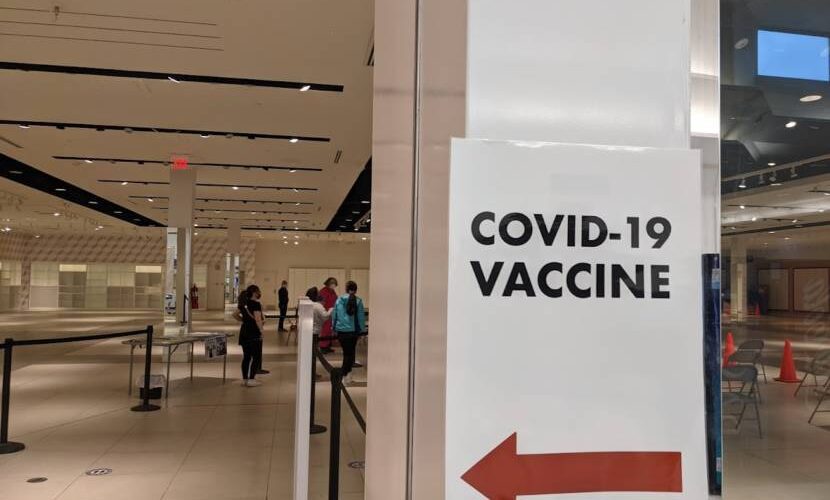 These Anchorage residents waited until August to get a COVID vaccine. Here’s why they’re finally getting the shot.

Nationally, research suggests that there are broadly two groups of people who still haven’t gotten vaccinated: those who say they never will, and those who are waiting to see how others respond to it.

The COVID-19 vaccine has been available to all Alaska adults since March, but some people are just now getting their shots.

So what’s convincing Alaskans who’ve held out for this long? Nurses say there are about just as many reasons as there are people getting vaccinated.

“We see everybody — suits and ties to kids starting school,” said Elida Spiro, a nurse working for the Anchorage Health Department who’s been giving shots since the vaccine became available. “It’s just a mix wherever we go.”

For people like Leo Encarnacion, getting back to his home country of the Philippines this January is the main motivator.

He recently arrived in a spacious room that used to house a Forever 21 store in Anchorage’s Dimond Mall, pushed in a wheelchair by his wife, Teresita.

“Once you get to the country, the Philippines, they will ask you for some kind of a vaccine card. And if you don’t have one, I don’t know if they’re gonna let you in,” he said.

Encarnacion said he’s undergoing cancer treatments, and he wasn’t planning to get vaccinated until recently. He said he considers himself resilient to COVID-19, though the highly infectious delta variant is worrying him a little.

“Despite my condition, my upper body is strong. I don’t have any problem when it comes to heart, lungs, liver and everything like that, I’m good,” he said. “But still, you don’t know what’s gonna happen because of this COVID-19.”

About 1,000 Alaskans are getting vaccinated each weekday at clinics across the state.

During reporting for this story at several sites in Anchorage, about half of the people approached declined to give their full names and, in some cases, their reasons for getting vaccinated. City and state health officials are gathering data about reasons for vaccine hesitancy to inform their public outreach, but said they don’t have any recent research ready to publish. Nationally, research suggests that there are broadly two groups of people who still haven’t gotten vaccinated: those who say they will never get the shot, and those who are waiting to see how others respond to it.

Health care workers in Anchorage said, anecdotally, they hear people choosing to get vaccinated now are driven by fears of new waves of infection, employer mandates or border-crossing requirements. Some, like Michael Anderson, are still a little skeptical of the scientific consensus that shows the vaccines don’t have serious side effects.

“Every once in a while you hear something bad about a vaccine,” he said. “So I just thought I’d give it more and more time to work itself out.”

He said he’s been researching the vaccine, and while he believes the scientific consensus that it is effective, he thinks the government’s database of adverse effects isn’t maintained well. Eventually, he decided the evidence was strong enough.

“With so many variants coming, I just decided it was time,” he said.

For some, reasons for getting vaccinated are personal. One woman at the Tikahtnu Commons clinic said she wanted to meet her granddaughter, who was born during the pandemic. Her daughter asked her to be vaccinated before she came to visit. She didn’t want to share her own name because, she said, she considered the decision private.

“I know it was important to her because we weren’t allowed to be around them right after the baby was born. And it was just really hard,” she said. “So when she asked, there was no real hesitation.”

After getting the one-dose Johnson & Johnson vaccine, she said she’ll now be able to visit her granddaughter out of state.

For Nina Hanson, the issue was logistics, she said. Hanson said she’s been eager to get the vaccine since it was approved, but couldn’t leave her newborn baby at home alone.

“Ever since a pandemic started, I’ve been at home,” she said. “And so I’ve been waking up at like seven o’clock at night.”

Most clinics are only open during business hours. Hanson said she was finally able to find a time last week to get her vaccine, which will also allow her to get back to work soon.

At a pop-up at the Fairview Community Recreation Center, a woman who gave only the name Azara said an upcoming trip through Canada prompted her to get the vaccine. She didn’t want to share her full name so her colleagues wouldn’t know she’d been unvaccinated for the past few months, she said. And she has an excuse for taking so long — sort of.

“I tend to procrastinate things,” she said.

Health officials say that whatever the reason, they’re just happy to see people getting vaccinated.