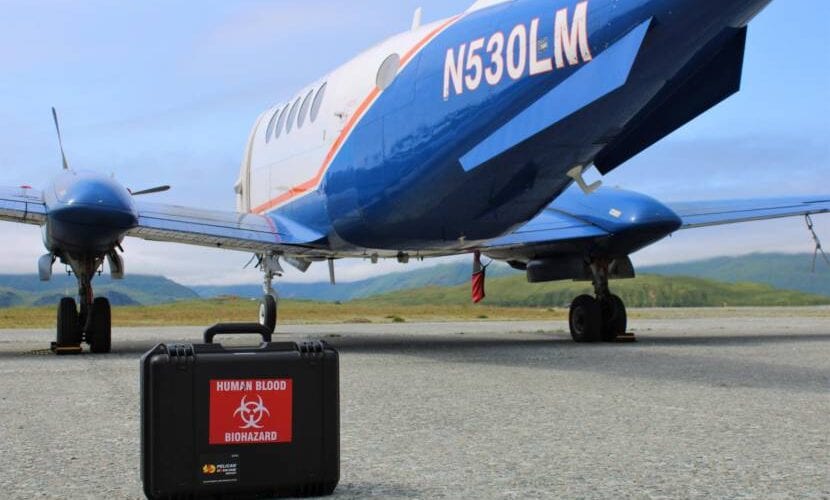 Emergency blood supplies can save lives, but few rural Alaska communities have them

Providers in rural Alaska have been pushing to store blood supplies closer to the communities they serve.

When someone who’s injured or sick needs blood, medical providers can clot the blood or increase blood pressure to buy some time before they can get a patient to the hospital.

But when it comes down to it, LifeMed flight paramedic and Unalaska base chief Angela Niemi says no amount of saline solution or clotting medication will save someone who needs a transfusion.

“You’ll watch a person just kind of bleed out and die in front of you,” Neimi said. “And there’s nothing you can do.”

That’s why providers in rural Alaska have been pushing to store blood supplies closer to the communities they serve. But getting blood from the blood bank in Anchorage is complicated by strict storage and transportation requirements, limited infrastructure and an overall shortage of blood donations.

One company that’s been working to get better access to blood supplies is LifeMed Alaska, a first responder and emergency transport company that serves communities all over the state — from St. Paul Island in the Bering Sea to Wolf Lake in the Mat-Su Valley.

The emergency medical care providers respond to all kinds of trauma and illnesses. They help people in generally remote areas get to hospitals when they’re hurt or sick, often under inclement Alaska conditions and with limited resources — one of those being blood.

The company started carrying its own blood supply at its Anchorage base around 2016. But last April, Unalaska became the first LifeMed location outside of Anchorage to carry blood products.

Neimi has worked as a paramedic for LifeMed for eight years, about five of which she’s spent at the Unalaska and Dutch Harbor base. She said having access to blood on the island — which is about a 3 hour flight from Anchorage — is a huge deal for providers and patients.

“There’s lots of times when you watch the patient and wish you could give them some blood because you know if you had blood products, you could — for lack of better words — nurse them through to get them to a doctor, to get them to a surgeon or [operating] suite where they can get what they ultimately need,” she said.

LifeMed has been working with the Blood Bank of Alaska to improve access to blood products in remote areas of the state for roughly five years. Unalaska was the first of the seven LifeMed bases outside of Anchorage to carry blood products. Prior to that, the nearest blood that LifeMed providers had access to was in Kodiak.

Now, when patients on the island need blood, Niemi and her crew pull two units of type O out of what she calls an “astronomically expensive” refrigerator at their home base in the Unalaska Valley. Then they throw it in a black refrigerated carrying case labeled “Human Blood” and head to the plane.

The Blood Bank of Alaska is the only blood bank in the state, and LifeMed is the only first responder flight team that stores blood at its remote locations and carries it on transports. LifeMed Clinical Services Director Erik Lewis said the company only has three bases where it actually keeps blood products: Anchorage, the Wolf Lake helicopter base in the Mat-Su Valley and Unalaska.

Part of the reason why blood is so scarce in remote places is that it’s really tricky to get access to it, Lewis said. It’s even tougher to transport.

“It gets packed in special boxes and checked in and checked out when it exchanges hands,” he said. “It’s very much like it’s a medication. We document who signed it out to whom. We keep track of each blood unit number, and how long it was out of the refrigerator and in the cooler.”

Lewis didn’t say how much the company pays the Blood Bank of Alaska for each unit of blood, but he did say the significant logistical challenges of carrying and storing it — such as detailed tracking and special equipment like sensors and cameras on the refrigerators and coolers — speak to the costs, as well as the company’s commitment to rural Alaska.

The units have to be replaced every three weeks. And if they’re not used, Lewis said they’re returned to the Blood Bank of Alaska, assuming all documentation is sound.

In order to store and transport blood, LifeMed also has to work with several regulatory agencies, such as the American Association of Blood Banks and Clinical Laboratory Improvement Amendments. But Lewis said what makes getting blood to remote parts of the state particularly challenging — and what keeps more first responders from getting access to it — is that Alaska just doesn’t have a whole lot of donors.

“They didn’t have an unlimited supply of blood to give us because blood has a fairly limited shelf life. And it wasn’t like they had a large backstock,” Lewis said.

Ashere Chait, the director of marketing for the Blood Bank of Alaska, said the company is using tactics like mobile blood banks to help get more donors so that they can be a resource for more Alaskans in need, especially in places where there aren’t hospitals that have quick and easy access to blood products.

“[LifeMed] allows us to provide blood in places that maybe wouldn’t [have access] without them,” she said. “So they’re a critical piece to that infrastructure to make sure that people are safe.”

LifeMed is working to expand the reach of its miniature blood bank system to other rural areas in Alaska, according to Lewis. And those efforts are appreciated by staff at clinics in isolated areas like the Aleutians.

“The clinic has never really been in a position where we could manage and monitor something like [blood],” she said. “And so to have LifeMed having that resource on island is a pretty incredible gift.”

To find out more about the precious resource of blood or to learn about becoming a donor, visit the Blood Bank of Alaska’s website.