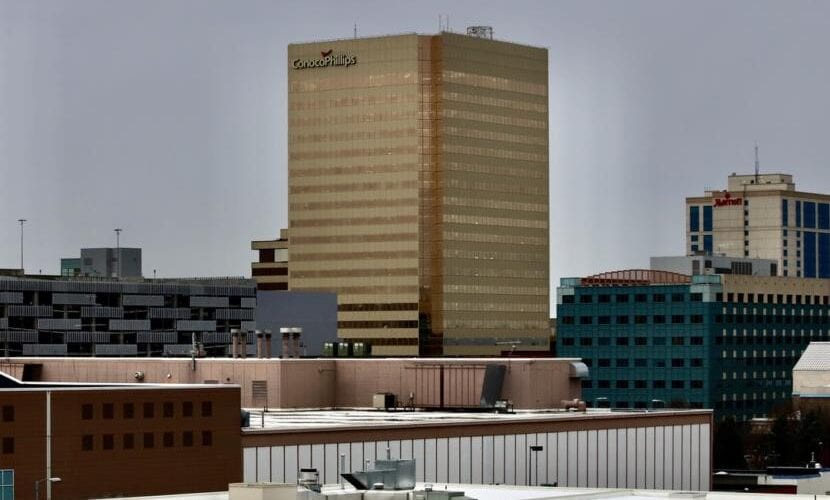 According to the charges, part of the scheme involved charging Conoco for pipe inspections and filling out time cards for inspectors who did not exist.

A senior ConocoPhillips employee tricked the oil company into paying more than $3 million to a business owned by his friend, an Anchorage police officer, for work that was never performed and materials that were never received.

That’s according to wire fraud charges federal prosecutors filed Wednesday against Forrest Wright and Nathan Keays. Wright had been a senior drilling and wells planner at Conoco, and Keays is a K9 officer with the Anchorage Police Department.

Wright resigned following a civil lawsuit Conoco filed in December to get back its money. The Anchorage Police Department put Keays on paid leave in December after learning of the allegations. In a statement, a police spokesperson said Keays was put on unpaid administrative leave Thursday.

“Officer misconduct will not be tolerated, and this allegation is in no way a reflection on the dedication and professionalism of the men and women who continue to serve Anchorage residents,” Anchorage Police Chief Justin Doll said in the statement.

A related FBI investigation led to the charges this week, though Conoco’s lawyers in the civil suit have been trying to recoup the money they say the pair stole for months, including taking control of at least 17 houses in Las Vegas that Wright’s personal investment company bought.

Conoco claims the men embezzled nearly $7.3 million, while the criminal charges so far only allege they stole about $3.1 million.

The charges say Wright and Keays have been friends since childhood. A yearbook from Fairbanks’ West Valley High School shows the two attended the school together in the late 1990s.

According to the charges, Wright conspired with Keays to make it look like Keays’s insulation-spraying business, EcoEdge Armoring, could perform services for Conoco. The charges say Wright set up EcoEdge as a vendor to Conoco — which is described in the charges simply as “Victim Business” — and instructed Keays on how to submit fraudulent invoices.

“Keays had zero knowledge of the oil and gas industry,” the charges say, “To overcome this obstacle, Wright and Keyes conspired to provide technical emails to Victim Business that appeared to be from Keays, when they were in fact composed by Wright.”

According to the charges, part of the scheme involved charging Conoco for pipe inspections and filling out time cards for the inspectors, who turned out to not exist. In another, Wright allegedly set up EcoEdge as a vendor for a special, patented drill rig mat — the type that’s laid down to protect tundra from drilling operations — and billing for the mats, which EcoEdge never possessed nor provided to Conoco.

The charges say Wright received a 50 percent kickback on the money he directed to Keays.

An FBI agents’ review of Keays’s personal email account found that he had deleted nearly all emails from Wright, an indication that, “as a veteran law enforcement officer, Keays likely knew what he was doing … was fraudulent in nature,” the charges say.

According to the charges, Wright admitted during an interview with an FBI agent that setting up EcoEdge as a vendor had been fraudulent, and he seemed to be trying to protect Keays at one point, saying he had deleted emails to Keays. But the charges say the FBI found several of Wright’s emails that corroborate the scheme.

An initial court hearing on the case had not been scheduled as of Thursday, and neither Wright or Keays had attorneys listed.

ConocoPhillips spokeswoman Natalie Lowman said in a statement that the company has recovered more than $3 million of the stolen money through its lawsuit.

“We are pleased to see that the perpetrators of this fraud are being brought to justice,” Lowman wrote. “ConocoPhillips will continue to cooperate with the authorities on this matter.”