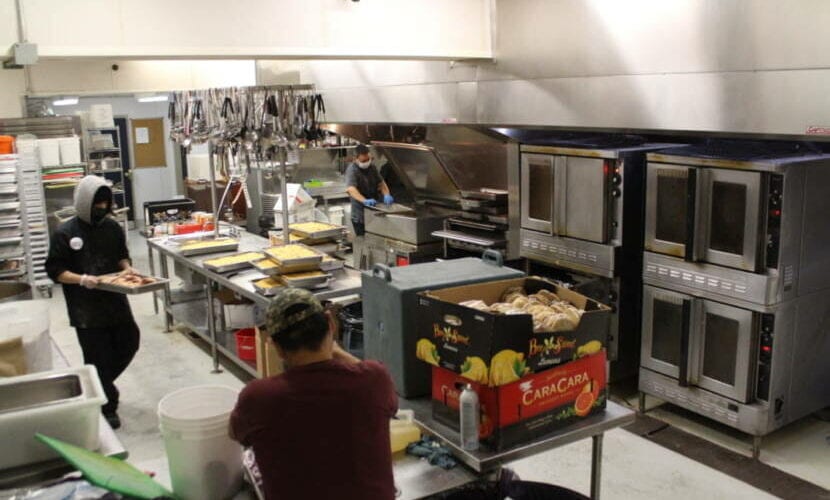 Since the pandemic began, Anchorage’s largest soup kitchen has had to overhaul how it serves residents in need of a hot meal moving from communal meals to prepackaged ones.

Since the pandemic began, Anchorage’s largest soup kitchen has had to overhaul how it serves residents in need of a hot meal moving from communal meals to prepackaged ones. And those changes may be part of a lasting shift in how the city addresses the needs of residents who are homeless.

The benefits of moving to pre-packaged meals have been two-fold, said Scott Lingle of Bean’s Cafe. First: COVID safety. Soup kitchen managers realized that communal meals were a big vector helping to spread the disease.

That concern will fade away with concerns about COVID-19, but Lingle said that there’s another bonus: prepackaged meals offer homeless residents flexibility.

Imagine you are without a place to live, said Lingle. With prepackaged meals, “I can focus my energy and my attention on finding housing or finding a job, or whatever I need to focus on in my day, it might even be something as simple as getting some sleep. I can focus on that because I don’t have to worry about food,” he said.

At the Sullivan Arena shelter, communal lunches are still served, though managers hope to phase them out within a month. Lunch still draws dozens of guests who stand in a line that snakes around the mezzanine level in front of the concession stand.

Guest Jonathan Cash said that he likes the prepackaged meals. He said sometimes the communal meals aren’t enough, so he’ll stash a meal away for later.

“Sometimes I’ll wake up in the middle of night hungry, and I’ll have one of those,” he said, “I think my favorite would be fried rice with chicken.”

The packaged meals are offered 12 hours a day, and shelter operators say the lines have gotten shorter as guests have gotten used to having meals available throughout the day.

The pandemic forced Bean’s Cafe to do a quick pivot. It not only took over operations of the Sullivan Arena shelter but also had to expand food production about threefold. Paid staff in the kitchen on 3rd Avenue near Ship Creek went from two to 40 basically overnight.

Bean’s Director Lisa Sauder said that as the number of people within the city’s shelter grew, Bean’s and its partner organization, Children’s Lunchbox, have increased the number of meals it serves threefold. It’s now delivering 2300 meals a day to the Sullivan and other hotels.

“In just under a year, that’s tremendous growth,” said Sauder.

The expansion of its kitchen has offered opportunity for some of the soup kitchen’s patrons as well. Head Chef Aaron Dollison, who himself struggled with addiction and homelessness and frequented Bean’s in his younger years, has kitchen staff that includes a number of people who were residents at the Sullivan. As part of the Shelters 2 Success program, people like Francisco Calvo have been able to get full-time work preparing meals. Calvo found himself at the shelter when he lost a job due to the pandemic.

“I’m quite blessed that I actually am working, you know, and I’m actually contributing to help people, whether it’s just putting a smile or putting food in their stomach,” he said.

And he’s learning more than just how to make spaghetti and meatballs. He’s learning skills and techniques that will help him in other restaurant jobs.

“We’re not just trying to do the basic European meals, we’ll try to mix it up. We’ll throw in adobo, we’ll throw in kimchi fried rice, just to give people a different diverse flavor,” he said.

Bean’s sold its old kitchen as part of a larger property acquisition by a group of philanthropists while it waits to move into a new permanent spot. It’s now relocating its kitchen to a smaller administrative office.

There’s a lot of uncertainty for the operation still as Anchorage must decide how it wants to address homelessness once it closes the temporary mass shelter at the arena.

“I think there’s a lot of community discussions that have to happen. Do we want one big shelter? Do we want numerous smaller shelters? Do we want a combination? There’s many options on the table,” said Sauder.

City officials have said they hope they hope to have a more permanent option for guests currently staying at the Sullivan Arena by the end of the summer, but the plan will ultimately fall to the next mayoral administration and the Assembly.