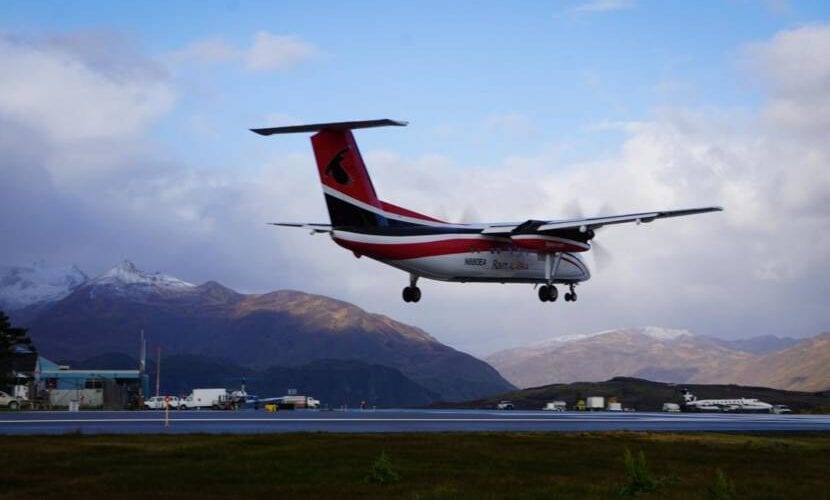 With one hurdle left, Ravn aims to relaunch service To Unalaska

Ravn Alaska says it could resume scheduled flights between Anchorage and Unalaska in two weeks.

Ravn Alaska says it could resume scheduled flights between Anchorage and Unalaska in two weeks, but there’s at least one hurdle left to overcome.

On Friday — for the first time since RavnAir Group filed for bankruptcy earlier this year — a DeHavilland Dash 8 airplane landed on Tom Madsen Airport’s short 4,500-foot runway. And the appearance of a Ravn-branded aircraft could be a sign that regular commercial flights between Anchorage and Unalaska are on the horizon.

On board the aircraft was a nine-person delegation of Ravn executives and Federal Aviation Administration officials. Rob McKinney, CEO of Ravn Alaska, was among them. He leads the company that bought RavnAir Group’s core assets in the wake of its sudden bankruptcy.

“We’ve invited the Federal Aviation Administration to fly with us out here to Unalaska — one of our more challenging destinations — to make sure that they’re comfortable and happy and can see that we are offering a safe service to the flying public,” McKinney said.

It was a dry run to test the Aleutian route before giving the embattled airline the go ahead to resume scheduled air service.

McKinney said he originally hoped to relaunch operations in mid-August. But due to a number of hurdles getting FAA and Department of Transportation approvals in place, the airline shifted the timeline to mid-September and eventually continued pushing the relaunch back.

But on Tuesday, the FAA granted permission for the airline to finally begin flying charter flights, and the DOT issued what’s called a “show cause order,” which opens a 14-day window for anyone to show cause for the DOT not to find the air carrier fit, willing, and able to provide scheduled air service.

While regulators take public input during the two-week window, McKinney said larger companies will be welcome to charter the 37-seat Dash 8 aircraft round-trip from Anchorage to Unalaska.

“So we’ll be able to, at least, start moving fishermen out here and get prepped for the next season coming,” McKinney said. “So that’s something. It’s not all that we’d hoped for, but at least it’s a little bit of service to get the community back connected.”

McKinney said Ravn has planes and flight crews ready to go, and the airline could start serving places like Unalaska in just two weeks if no formal objections are lodged during the 14-day window.

The airline hasn’t published ticket prices on its website, but McKinney said Ravn is working to codeshare with Alaska Airlines to allow customers to purchase tickets through Alaska Airlines’ mileage program.

“I talk with Alaska Airlines about every week, and they’re eager to start working with us,” he said. “But they want to make sure that safety is what it needs to be. So they’re going to come in and do their own audit of everything that we do and fly on our flights. And then, when they’re ready, they will give us the blessing. But they’ve said it’s their intention in the future that they are going to re-partner with Ravn.”

According to McKinney, the initial plan is to fly Dash 8 airplanes between Anchorage and Unalaska. Eventually, he said, they hope to use larger aircraft — but he ruled out deploying a Saab 2000, the model involved in a fatal plane crash that killed one passenger and injured more than a dozen others on Unalaska’s runway last year.

Some Alaskans are reporting they heard sonic booms from the aftershock of the volcanic eruption!